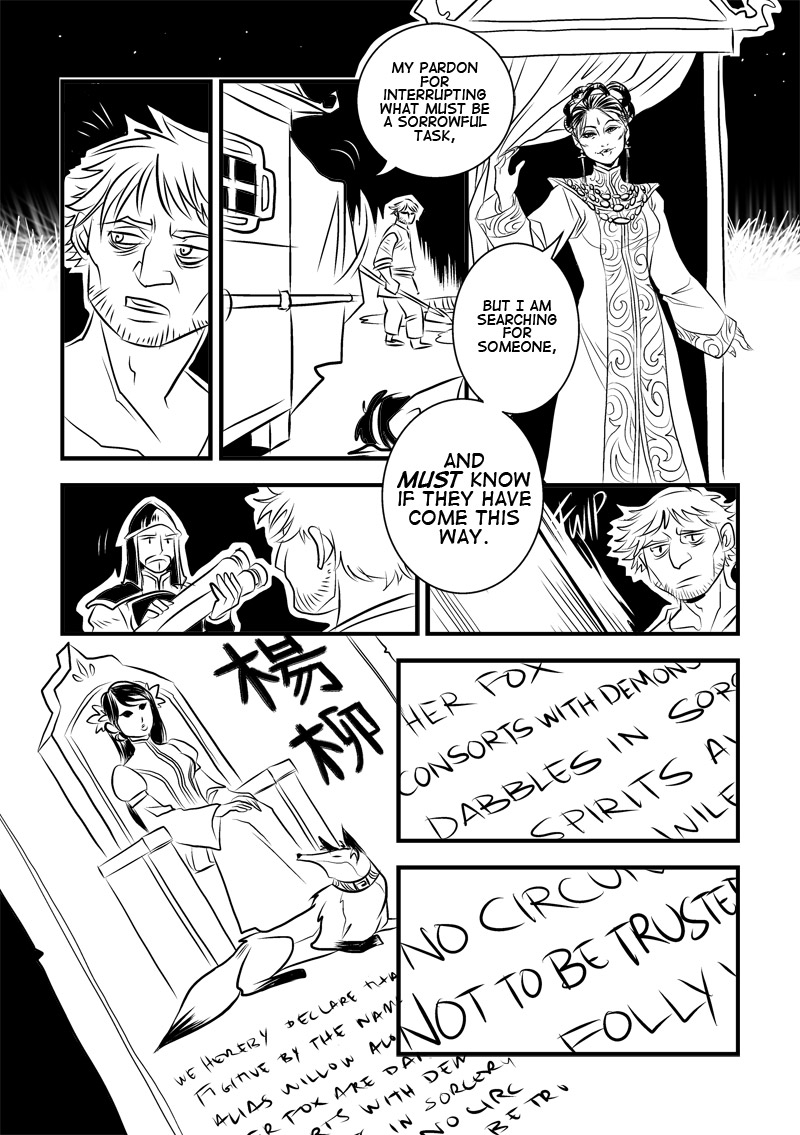 …and the plot thickens…

Hm….what crime could they be guilty of that makes them “not to be trusted.”

“Dabbling in sorcery” and “consorting with demons” apparently.

Hm… Aaaand I immediately think of Gideon. Whole shapeshifting thing plus their matching earrings? Deeefinitely a bond of some kind there.

Great job, by the way, on that wanted poster; Willow and Gideon look amazing. 🙂

Perfect quote. Willow’s in the “amazing” category, no? 🙂

Thank you!
Yuuup, yup-yup, definitely in the “amazing” category, hands down. 🙂

I got a bad feeling

Pfsh, as if dabbling in sorcery is necessarily a bad thing. The use of magic can be good as well as bad; it all depends on the user. And isn’t Gideon more of a Familiar than a demon? When was a Familiar ever a danger to anyone >_>

He acts familiar. No boundaries, that one.

Ooh bugger.
This is not going to end well. Like the poster! And nice job on the script!

As if he needed another reason to be mad at Willow.

Ooo… The Chinese words means Willow. Would have been cool if the rest of the wanted poster was in Chinese too but it would be a translation nightmare. XD

Yeahhhhh. It would have been awesome, but we just didn’t have the time to get that worked out. (Plus we didn’t want to make any mistakes.)

This is really ironic because. . . that character, “Yang,” happens to be my last name. It’s often given different definitions, one of them being willow (according to the internet), but I usually think of the poplar tree (white tree with black eye-shaped streaks; has lovely golden leaves in the autumn) when I think of the character “yang.”

Though if this is Willow’s FIRST name, the characters need to be reversed (because Chinese is written right to left, last name first, traditionally).

Not to be considered an error though! Since the rest of the poster is in English, I’m just going to go with the flow and say that Willow may be the heroine’s last name, and those darn English folks (rather’n the artist and author of this webcomic) probably DID screw up the ordering of her name if it’s written first name, last name. Happens ALL the time actually. I’ve heard stories that they would trick the Chinese immigrants coming to California into seeming ignorant/unworthy of immigration by confusing them into reporting their names backwards (last name as first name, and vice versa). Darn Europeans.