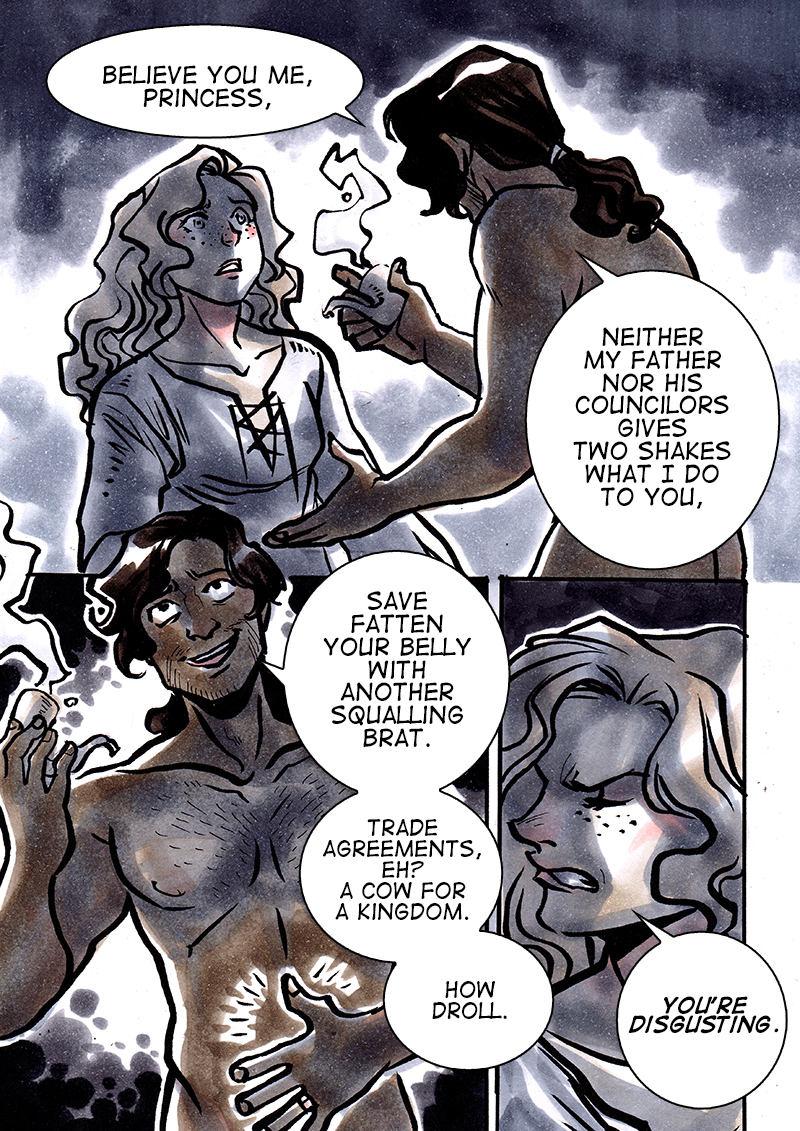 Such a charmer in every possible way…

I sincerely hope that in the end, Laoghaire’s sister and the prince’s mistress ditch him and run off into the sunset together, leaving him to stew in his self-pity. Jerk deserves no less or better.

I really, really hope so, too. Not only would it be the perfect irony to punish him with, I bet it would make the other two really happy as well, and they could use that.

I’m getting the impression he’s purposely pushing her away in any way possible regardless of how much a bastard it makes him. He definitely seems to be an expert at building up those walls. I wonder how soon a slap or punch to his face is incoming? Judging from our princess’s face in the last panel, it’s not too far off. 😉

Yup – sorry. Was on autopilot when I wrote it that way. >_< Thanks!

Wow. I’m thinking of that line from Fight Club. “You’ve got a kind of sick desperation in your laugh, don’t you.”

Yeah, I’m wondering what he’s got in that pipe…

You know, I’ve been thinking this for like three pages now… but I totally love the prince.

Apparently I’m the only one though.

((And yes, I know he slapped the mistress, but we don’t know why. So you know, don’t judge unless you know. Also, keep time periods in mind, hitting woman isn’t necessarily a bad thing for his culture.))

I feel like the princess was expecting a bit to much from what was obviously going to be a loveless marriage, I mean, it’s like waiting to be let down. Don’t get mad at him for being upfront with you, at least he’s not leading you on. Also, how is it rude for him to only have sex with her as long as needed WHEN SHE DOESN’T EVEN LIKE IT. Plus, I feel like we’re forgetting that the prince is just as forced into this union, and he probably doesn’t want to sleep with her equally as much as she didn’t want to sleep with him.

Also she kind asked for it by being so rude in the first place. Seriously, if you don’t want him to call you a cow maybe don’t all him a dog. Just saying.

Oops, apparently I mis-remembered about her calling him a dog. She still insulted him though.

Someone needs to read up on “Victim Blaming and Relationship Abuse”.

I was going to said this. Beat me to it 😛

I never said he was right, I just said that she started it. Not saying he should have finished it. XD

Hmm, well, I see your point, but what’s to love about the prince? I mean, I love how well-written he is as a character, but even if he isn’t so terrible, as you say, he still isn’t incredibly likeable. Calling the princess a cow was uncalled for, even if he did want to be upfront. Unlike Gideon, who does at least care about Willow despite the snarky remarks, the prince doesn’t seem to have any redeeming qualities (so far. Yes, I know you said to refrain from judgement until we get more information, but this is just what I have observed at this point in the comic).

Also, if we /are/ going to keep time periods in mind, I’d say that it’s probably expected of the prince to be more courteous to his new bride. That’s likely why she took so much offense to his bluntness.

-But that’s just my opinion, there’s nothing wrong with liking the prince! I think you’re probably not the only one, but with so many people hating on him in the comments, anyone who agrees with you might not want to say anything.

I would say I was amused by him? Those three pages made him seem less huge jerk and more… I dunno. Human? Now, the next page pushes him back into dislike territory, though I do still love the development we get for the characters.

Maybe I’m mistaken, but it looks like the prince isn’t all that human. Look at that sixth finger in the first panel (or terrifyingly large middle-finger).
Joke aside, I love the art, it’s awesome on every page and it gets better and better :3 also, hands are hard to draw.
The story is great too, can’t wait to see how it’ll evolve.