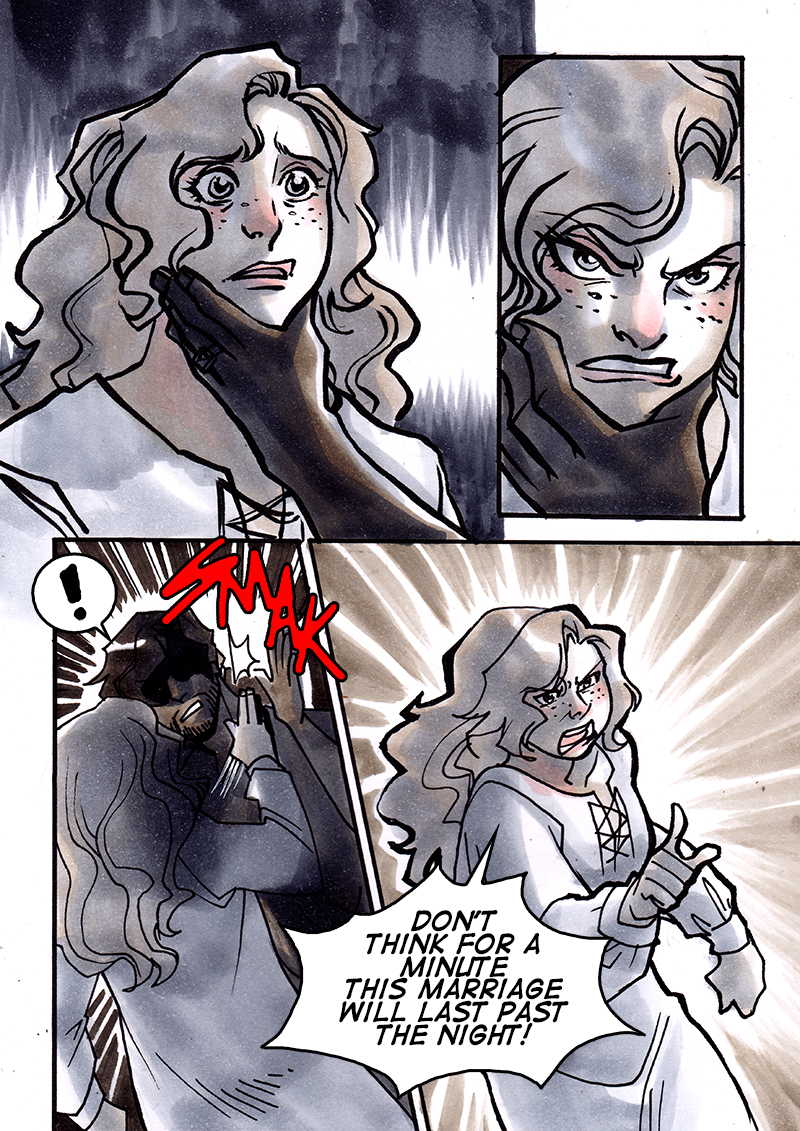 The princess strikes back!

She goes from shocked to furious in a nanosecond – the bastard is in for it now, muahahaha!

HELL YEAH!!! Now give him the chair and throw him into the ocean! 8D

Oh god please kick his ass. Use that obvious martial arts seen in your life reflections. Of course, knowing the authors, she gon’ die, but TRYING to be positive here. D:<

Im so very worried youre right ;-;

Love the expression in the second panel. Beautiful.

(though i am worried that because they are alone and he has anger issues, this will not end well.)

I just love that, she’s DONE with his shit

I love her!! I hope the prince gets his ass kicked!

*sits back, pulls bowl of popcorn into lap*

Here we go, ladies and gentlemen. A clock is about to be thoroughly cleaned. *tosses buttered popcorn kernels back* The question now is how long it will take. My money is on three minutes or less.

She DOES know how to use a sword. And a bow. But PLEEEEASE don’t kill her or that would make two daughters that poor king will have lost! I don’t know if his family could take the heartbreak!

And I really want this gal to have a better life! Even if she has to cause a mutiny to do it!

Kick him! Kick him in the balls! And then throw him overboard!

You know, really, all she has to do is find a way to contact home and let her family know how she’s been treated and that she’s been threatened with bodily harm. The king seemed like a caring daddy, so I can easily see him getting pissed off enough to act on this.

If the right political pressure is applied, Prince Douche’s country might have no choice but to annul the marriage and let her go home, unless they’re willing to risk a war or trade sanctions.

why do i get the felling that the prince is going to fall in love with her now? :))

Be he living, be he dead, grind his bones to make your bread-

May I say that, as a fan of Hans Christian Andersen, I dislike what you’ve done to his story “The Little Mermaid”? Specifically, I dislike how you’ve turned the prince from the story into an utter creep. In the original story, the prince wasn’t a bad guy–he was just simply unaware that the Mermaid was in love with him, and chose to marry the other girl because he knew nothing of the Mermaid’s role in saving him from the storm, and the Mermaid was unable to tell him due to selling her voice to the Sea Witch. He was never actively trying to be cruel to the Mermaid or hurting her feelings on purpose. There was also no indication that his marriage to the other princess was going to be anything but happy.

Here, however, you’ve turned the prince into an arrogant, violent, selfish, womanizing, abusive sociopath–and even made it so that he (and not the Sea Witch) is the one who took the Mermaid’s voice away from her. As someone who grew up on Disney’s classic movie version of the Little Mermaid, I am personally deeply disturbed and offended by your take on a classic character from a classic story, and I think Hans Christian Andersen would be rolling over in grave if he knew what you had done to his story.

There I’ve said it.

(But this is not against you personally, just against the way you’ve chosen to reinterpret a beloved children’s story.)

Though you’re perfectly allowed to dislike their interpretation, I think they read the story very well and that they don’t need you or anyone to remind them of it. They just changed the prince’s personality into something credible (not that the previous one wasn’t, but for somebody who’s apparently had all he’s ever wanted handed to him (except for the throne) it’s common to develop that kind of entitlment and therefore agressivity. That attitude is understandable (though not forgiveable) especially because his father ignores him. An entitled kid who gets ignored could easily become furious and violent with the people who can’t hit him back.

I get why you don’t like that, but don’t try to tell them what Andersen would like or not. You’re not him and anyone has the legal right to reinterpret his story. If you had a problem with the pacing, or the art, or the execution of the dialogues I wouldn’t have even reacted, but here you’re just telling them that they did wrong because they didn’t imitate the original story. That’s a bit mean. I don’t know about the other readers, but I’m here for an original story, not for a copy.

Also, take that into consideration: maybe they’ll use it as a way to mix the Little Mermaid and Beauty and the Beast. Because that prince would indeed be perfect in the role of a monster. But that’s just speculation.

Also, do you really want their story to end like Andersen’s? Do you?

The welcoming message in the home page says: “Our first graphic novel is entitled Fox & Willow, a story about a girl and her fox, and loosely based on a series of contemporary fairy tales”, and I’d say that the key word here is “loosely”. So the idea of a mute girl and a prince might be all they took from the original story, at least I wouldn’t expect more or be offended, as much as I might love the original or Disney version, this is another story, like, there weren’t any fox-spirits or bard-princesses in those stories anyway..

Also, consider this: Disney’s interpretation of “The Little Mermaid” bore little to no resemblance to Andersen’s, excluding the title and general plot outline. In the original first draft, the Mermaid was entrusted with a knife to kill the prince on his wedding night, less she turn to seafoam come dawn. She throws the knife away and proceeds to throw herself into the ocean, and dies.

In the second draft, much preferred by readers, angels take the mermaid’s soul to Heaven, promising that her sacrifice has earned her a place in the Kingdom of God and that one day, if she collects enough good deeds, she will be reborn.

The Little Mermaid was meant to be a beautiful but tragic tale about unrequited, selfless love that couldn’t be reciprocated. In that sense, “Fox and Willow” draws inspiration from that with Nerissa’s story. Do I agree with all the decisions the authors have made? Not especially. But this, like Disney’s film, is a loose interpretation of the story. If the comic is going in the direction I think it is, Nerissa will find true love with Laoghaire’s sister, and they will be happy. I hope. (pleasegodletitbetrue)

The way I see it, there is a reason this story is called ‘to the sea’ rather than ‘the little mermaid’. Anderson’s book is out there for anyone to read if they like it better. As far as we can tell the only similarity so far is that a girl fitting a mermaid’s description is involved. Maybe she is just a mermaid, rather than THE mermiad from the story? Maybe he is just a prince, rather than THE prince from the story? There are visual novels that depict Anderson’s story faithfully if that is what you’re after.

You have a right to dislike it, or even to be ‘personally’ offended (do you perhaps relate the prince in question if this affects you so personally?), just like I have the right to dislike your comment and advice you stick to vanilla versions of stories from now on (I read a story recently about a lion that kills a meerkat because it was hungry. Imagine that, Simba killing Timone? Disney should sue for defamation). This is not against you personally, I’m just expressing my amusement at your intense reaction to a story that is loosely based on themes from another…

Hmmmm….I may just have to start following this, as I’m having fantasies about what I would do to this jerk (not nice things!).