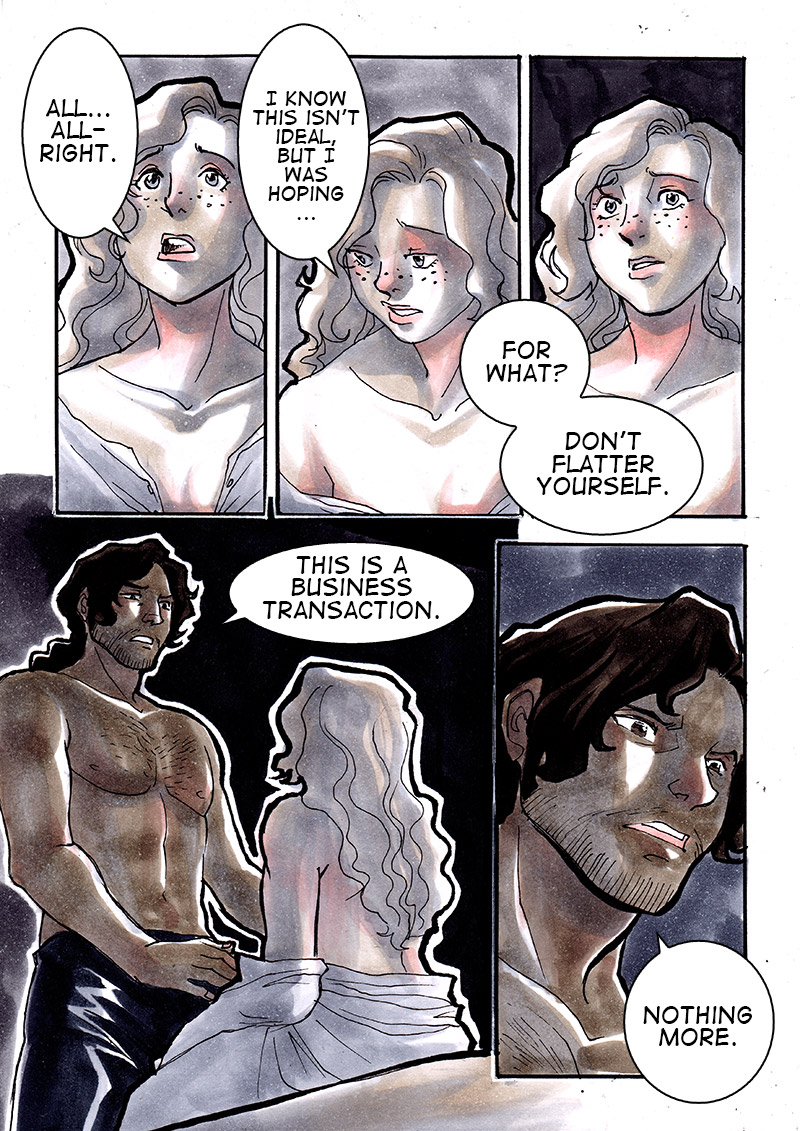 Ouch in all the ways!

Hey man, how about YOU go fuck yourself!

Preferably with a cactus.

Ugh. Even in pure business transactions it’s useful to grease things with some friendliness at least.

I am slightly confused why all this is happening on the ship, really. Wouldn’t it be better to wait until he’s home to marry and bed her in front of official witnesses from his side as well?

Okay I know I might get scolded for saying this. But I don’t care if he’s pissed he couldn’t have his little mistress. The Prince is a big spoiled jerk, bad enough she knows he’s showing no respect to her as a wife, now he’s gotta act like she’s the inconvenience, like in some way him being denied his mistress is her fault. She didn’t ask for the marriage either. I think the Prince is an arrogant pompous ass and I don’t care how he treats the mysterious girl, it doesn’t excuse how he’s being to the Princess.

You son of a—- I can’t believe he would say something like that. What a douchebag! Can I punch him?

I know it’s kind of a weird place to say this but… Wow the art is good!

That bastard. BASTARDDD
so angry right now I need a drink

I sincerely hope she tells him to go fuck himself and refuses to sleep with him. But with the way this is shaping up, being an easily abused piece of fluff is all she’s going to be and I find that deeply disturbing. Hope he get’s his comeuppance sooner rather than later.

Woman we keep thinking is the “mistress” is actually his sister or something (I guess lover would still work, but whatever), who is cursed. The only way to undo the curse is for mister prince up there to marry someone else. That’s why he’s so upset. He has no interest in this, but it’s the only way to break the curse. Maybe the reason he hit the “mistress” was an argument about whether or not they should go through with it. Something like “I’m going to save you whether you want it or not!” This could end with needing to kill the princess! Or maybe the “mistress” needs to kill the prince, and that’s why he’s marring the other girl. Maybe the reason he’s so rude to miss princess is he doesn’t want to get her attached to him.

Ooooh, the “mistress” is his sister, cursed like the mermaid, and she needs to kill the prince to free herself of the curse once he marries another woman. She doesn’t want to, thus him slapping her earlier.

Option two, he really loved the princess he was supposed to marry, but now she’s dead and he can’t even grieve properly. Not only that, they’re forcing him to marry her sister!

Okay, those are my two wild theories. (Honestly, I actually thought miss “mistress” was his sister when I first saw her. XD) Also, I can’t resist playing devil’s advocate.

Ahah, good theories! Sorry if I burst your bubble or anything, but I have sneaked a peek at the Character Profiles page. Her name is Nerissa, and she’s actually confirmed to be his mistress. Her description reads: “Prince Kadar’s mute mistress. Her origins are a mystery.” Not that your second theory couldn’t still be true, though!

My personal guess is that the prince is upset simply because of the forced marriage. He doesn’t know or love this woman, but he’s expected to have children with and spend the rest of his life with her. NOT that this excuses him being a jerk, I’m pretty sure he’s just being plain rude here and was abusive to Nerissa a few pages ago. As the obvious hints have shown, she is based on the little mermaid, but what direction the writers decide to take this in I can only imagine! I do hope she and the princess can get together though, since they’re cute together and it would be a much more refreshing type of love triangle solution. *fingers crossed* whatever happens, I trust that the story will unfold beautifully ^_^

Ah… well, that does kill my first idea. At least the part about her being his sister. Well, she could still be a lover he wants to save. *shrugs* It was more just having fun, I doubt this stuff will actually happen. XD

I do hope if there is a love triangle her and the mistress get together! 😀 They are super adorable!

With an attitude like that, he is probably not going to even get it up to get it over with.